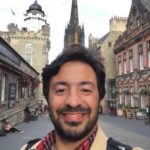 Marc Lynch’s “The New Arab Wars: Uprisings and Anarchy in the Middle East,” is a thorough analysis of the causes and legacy of the Arab Spring that have engulfed the Middle East since 2010.

Specifically, the book discusses the roots, trajectories, and consequences of the Arab uprisings for the region. It consists of nine chapters that focus on the greater region, from Tunisia and Egypt to the unrelieved chaos in Syria, Iraq, Libya, and Yemen. Lynch assesses the popular movements in the Arab world and the international responses during the uprisings. However instead of focusing on each country in a detailed manner, he focuses on the dynamics of the new regional politics and on the questions of what went wrong and what to expect. Lynch claims that these countries became the playground for new regional proxy wars, which were accelerated by international/regional interventions and resulted in a disturbance of the international/regional order.

Lynch underlines that the uprisings were initially peaceful and did not have ideological, traditional, sectarian, and religious motivations. He also emphasizes that Arab social media continues to be a significant driver for change. In fact, in all Arab countries where peaceful protests occurred, the participants reflected all layers of society. However, despite the initial peaceful atmosphere of the uprisings which broke the oppressive dictatorships and the status quo, they failed to stop the sectarian violence, Islamic radicalism, and proxy wars that the region has faced since then.

Lynch suggests that former US President Barack Obama’s much-debated decision on intervening in Libya with his NATO and Arab allies was a turning point for regional powers to begin proxy wars. In this context, Lynch argues that the financial, military, and intelligence support of rich regional states – the US’s traditional allies (Saudi Arabia, the UAE, Qatar, Egypt) — fed conflicts in the region. The shortsightedness of US policies became even more visible when these states armed their proxies in Libya, Syria, and Yemen. Considering that he was one of Obama’s advisors in Middle Eastern affairs, it could be said that this is more of a self-critique. Thus, while autocratic regimes continue to survive in the region, it becomes obvious that world powers cannot offer solutions to the regional problems.

In his discussion of the motivations of Sunni Arab states in this process, Lynch underlines their anti-Shite and anti-Iran policies. Indeed, there is a grave concern in the region regarding Iran’s aims towards Shia communities in Sunni-majority countries. Although Lynch finds this concern exaggerated, he does not adequately justify Iran’s clear relations with Shia groups in Iraq, Syria, and Yemen. Lynch highlights that Gulf states offered many scholarships to prevent youth participation in the protest movements. It can be said that the main goal of these scholarships is to stymie political and social change. Indeed, recent hostility between Saudi Arabia and Iran pushes their regional allies into a deeper division which makes the Middle East bipolar division more visible.

Lynch’s projection for the future contains both optimistic and pessimistic elements. He predicts that the wave of discontent will continue, and the US will not be able to decide the future of the Middle East regardless of the side it takes. As a matter of fact, the protests in Algeria, Sudan, Iraq and Lebanon, along with Trump’s relationship with the Gulf states, confirm Lynch’s prediction. He believes these failures (the coup in Egypt and the civil wars in Libya, Yemen and Syria) do not prove that Arabs are not ready for democracy even though the uprisings in most Arab countries failed. Although Lynch considers the “Arab Spring” to be a step towards democracy, the current developments in the region show us that the light of democracy has not yet appeared on the horizon.

“The New Arab Wars” is a valuable source for students and scholars interested in Middle Eastern Studies. It does a good job in contextualizing how the uprisings were affected by global interventions and led to proxy wars in the region. Considering this cause-effect relationship on the process of the uprisings, Lynch’s book follows a different path compared to most studies. In the book’s last chapter, “Where do we go from here?”, Lynch encapsulates his claims under five core points: “the Arab uprisings have not failed; the Arab regimes have not restabilized and are not the solution; more forceful intervention would not have saved Syria; the failure of the Muslim Brotherhood does not validate anti-Islamist views; and the Islamic State does not represent real Islam, but the challenge of jihadism will persist long after its state is destroyed.” These are very important claims the readers and American politicians should keep in mind. In this context, we see that the protest waves in the region will continue due to their regimes’ lack of care of their citizens’ expectations, as Lynch claims.  It can also be seen from the ongoing war in Syria over the past 11 years, that foreign interventions have not brought peace to the country. Additionally, considering the discussions about the recent resurgence of ISIS, it is understood that the idea of jihad will remain a major challenge in the region.

Mehmet Alaca holds an MA from the Department of Politics and International Relations of the Middle East at Exeter University in the United Kingdom. He is currently an Ankara-based diplomatic correspondent at Anadolu Agency and a non-resident fellow at the Center for Middle Eastern Studies (ORSAM). His works have been published in many national and international media outlets, particularly Washington Institute, LSE Middle East Center, The New Arab, Fair Observer, E-International Relations, Anadolu Agency, and Daily Sabah. He tweets at @mehmtalaca