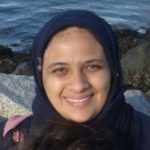 Egyptian President Abdel Fattah el-Sisi recently lashed out in defense of capital punishment during the inaugural summit of European Union and Arab League leaders in the Red Sea resort of Sharm el-Sheikh. In February, Sisi’s government executed 15 people despite claims that they had been tortured to secure their confession, the UN human rights office OHCHR said on Friday.

This incident is not the first time that Sisi had become irked by those drawing attention to the human rights crisis in Egypt. In CBS’s “60 Minutes” broadcast on January 6, he denied that the government was holding either political prisoners nor prisoners of opinion. He added that Egypt gave the “extremists” it had arrested fair trials.

However, a report from Human Rights Watch counted 60,000 political prisoners in Egypt. In a separate September 7, 2017 report, the group said that “An assembly line of abuse aimed at preparing fabricated cases against suspected dissidents, beginning at the point of arbitrary arrest, progressing to torture and interrogation during periods of enforced disappearance, and concluding with presentation before prosecutors, who often pressure detainees to confirm their confessions and take no measures to investigate the violations against them.”

Enforced disappearances often mark the start of the detention process. According to the United Nations Committee on Enforced Disappearances website, the definition of an “enforced disappearance” is an arrest, detention, abduction carried out by state officers and agents to places outside the protection of the law. Moreover, the detention is followed either by a refusal to acknowledge the deprivation of liberty or by the concealment of the fate of the disappeared person.

Youssef Eldemoky, a 21-year-old university student and poet who fled to Turkey after his release from detention, said in a video interview via Zoom he has never returned to his house because the national security services stalked him for three years after they detained him at the age of 17.

While he was in prison, Eldemoky made sketches of the types of torture that he experienced in the underground facility. He said that he was scared that if the drawings spread, the authorities would return him to the complex and he would be “disappeared” once again merely for revenge. 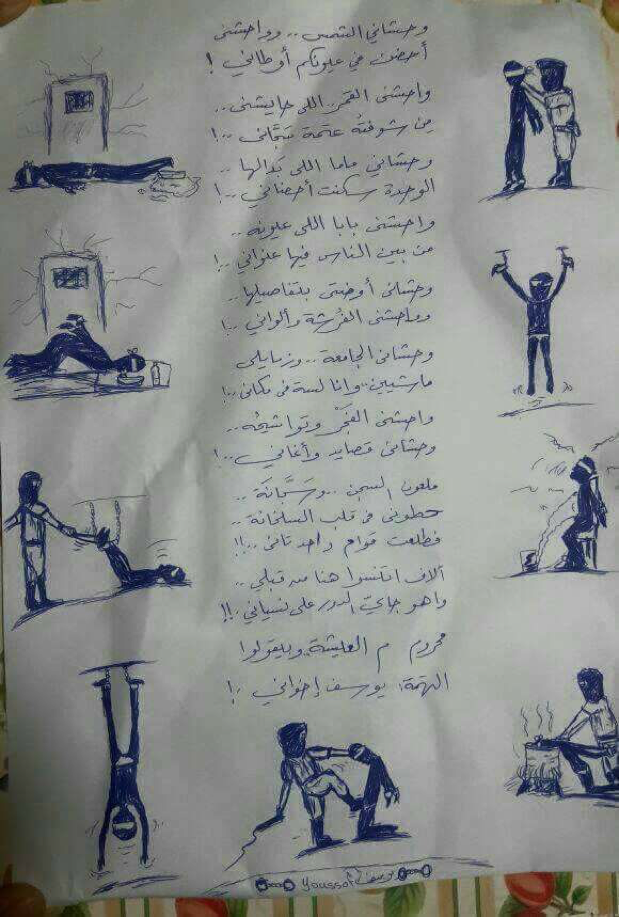 A sketch showing the types of torture that Eldemoky experienced underground at the national security building at Al Sheikh Zayed, and a poem talking about how he misses his mother, father, his room, the sun, the moon, and the dawn, cursing the prison and the jailers and making fun of his charge of belonging to the Muslim Brotherhood. Eldemoky provided the photo.

Eldemoky said that he had begun thinking of suicide after some of the torture sessions he had experienced in the underground floors of the national security office in El Skeikh Zayed.

Security officers used electric shocks on his chest and genitals, suspended him, slapped and punched him, he said.

“They asked me if I was injured anywhere on my body. Although I was injured, I never told them because they would give me an electrical shock me or hang me from where I was injured,” Eldemoky said.

Dalia Lotfy, an international attorney and a human rights advocate at the African Commission on Human and Peoples’ Rights, said in a telephone interview that some national human rights organizations would not submit these cases to international groups, making the plight of the victims worse.

Lotfy said, “The Minister of Foreign Affairs must reply to the UNHRC within 48 hours with the location of the enforced disappeared person.”

In 2016, around 1,735 victims including children younger than 15 years old, and in 2015, more than 1,840 people were recorded as enforced disappearance cases according to a report published on March 26, 2017, by Egyptian Coordination for Human Rights and Freedoms. Most of these victims were university students, according to the report. 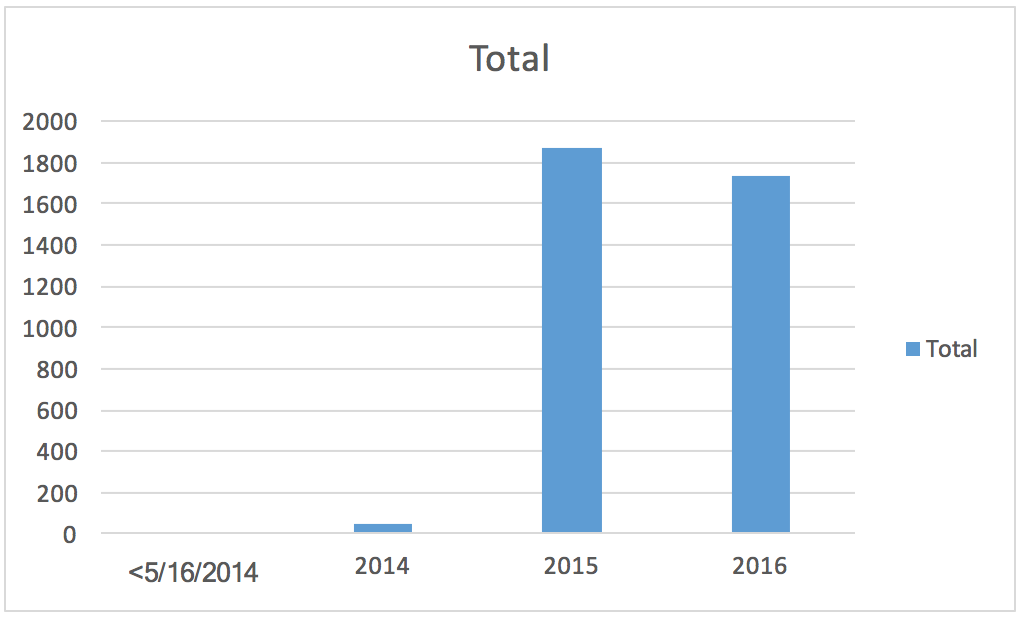 A stark increase in the number of enforced disappearances in the past two years. Source: The Egyptian Coordination for Human Rights and Freedoms and the United Nations Human Rights Council

The United Nations Human Rights Council assigned the Committee on Enforced or Involuntary Disappearances to oversee the claims of enforced disappearances and secret prisons. The committee has requested every year since 2011 that the Egyptian government allow it to inspect the facilities. It sent six reminders within six years. However, the government has ignored the requests, according to the United Nations 2017 report.

Many stories about false incrimination without evidence have made headlines and gained international attention, including those of Mohamed Soltan, Aya Hijazi, Abdullah Elshamy, Baher Mohammed, Mohammed Fahmy and Peter Greste. They were all found innocent and were released after international pressure from other governments and human rights organizations.

Another 2015 case of the Egyptian government carrying out false incrimination involved a 30-year-old man, Mohamed Abdalah, who was forcibly removed from a plane by Egyptian National Security Agency (NSA) and detained, his wife, Sara Mourad, said in a telephone interview. After concluding the formalities for their marriage in Egypt in December 2014, Mourad flew back to her family in Qatar to prepare for their wedding ceremony. Abdalah was traveling for their wedding, Mourad said.

However, the NSA enforced disappeared him and forced him to sign a false confession that he had established a terroristic cell, Mourad said.

Then the officers photographed him with some weapons, claiming that they had found them with him on his detention. Airport video records refute these accusations, Mourad said.

Political detainees in Egypt are not only imprisoned, but many are executed or given life sentences. There have been a record number of executions on political and terrorism charges since Sisi came to office in 2014 – at least 123 people, compared to only one case between 2011-2013, according to the Cornell Center On the Death Penalty Worldwide database. A European Parliament resolution has joined international rights groups in calling for a halt to the death penalty in Egypt. 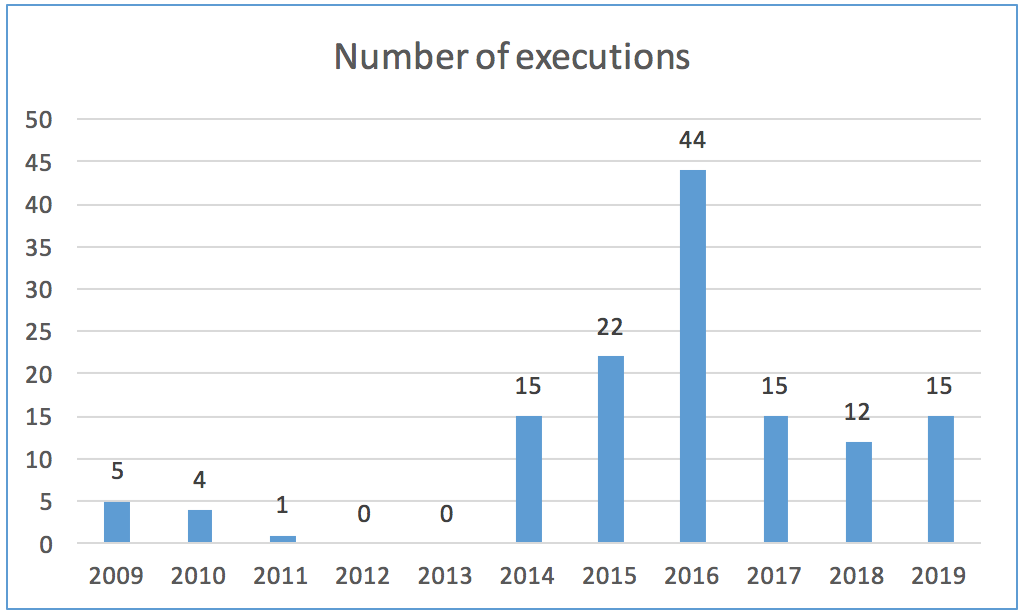 More than 2000 people are still facing the death penalty, according to Cornell Center On the Death Penalty Worldwide database.

An example of an unfair trial is Arab Sharkas case, which made domestic and international headlines. The military court charged the defendants with killing soldiers during a military raid in the village of Arab Sharkas, Sinai in March 2014, according to the indictment documents. The defendants, all civilians according to human rights groups, were tried and sentenced in a military court.

The defendants were already in prison when the alleged crimes for which they were hung occurred, Amnesty International said in an April 10, 2015 report. Three of the six defendants had already been “disappeared” to a military prison, Al Azouly, in Ismailia, 81 miles north-west of Cairo, at the time when the soldiers in Sinai were killed, the report said.

Hence, they could not have committed the crime. 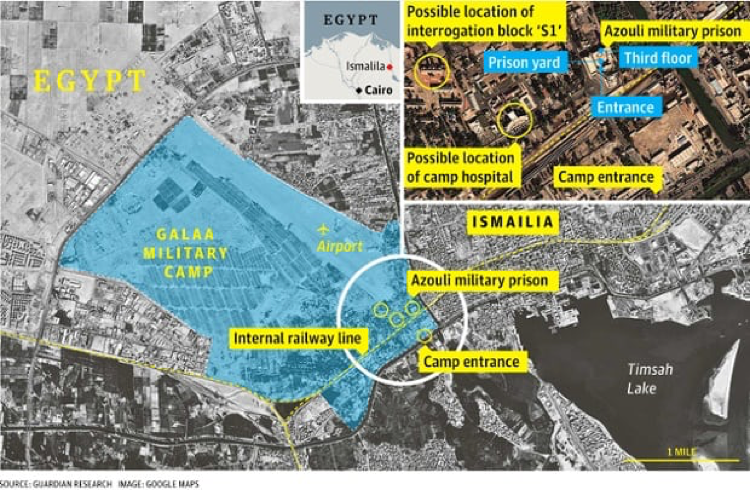 The location of Al Azouli in Ismailia. Image Source: https://www.theguardian.com/world/2014/jun/22/disappeared-egyptians-torture-secret-military-prison

The Arab Sharkas case is not the only case where civilians have been tried in a military court or where the defendants have been executed after an unfair trial. On Tuesday, December 26, 2017, 15 men were convicted on terrorism charges and reportedly executed.  They had been found guilty by a military court of killing several soldiers in Sinai in 2013, according to a New York Times article.

On the following Tuesday, January 2, 2018, five others were executed by hanging in the Kafr El-Sheikh Stadium case, according to the same article.

In response to these multiple executions within two weeks, Office of the United Nations High Commissioner for Human Rights spokesperson Liz Throssell said on January 5, 2018 in Geneva that  “Despite the security challenges facing Egypt – in particular in Sinai – executions should not be used as a means to combat terrorism,” according to the press briefing notes.

Throssell added that “Civilians should only be tried in military or special courts in exceptional cases.”

“Reports also indicated that the prisoners who were executed may have been subjected to initial enforced disappearance and torture before being tried,” Throssell said.

Throssell said that capital punishment must stop because trials in Egypt do not meet the necessary standards of fairness and due process.

However, the judges in civilian courts are often as unfair as those in the military courts. For example, Judge Mohammed Nagi Shehata ordered capital punishment for 183 supporters of the Muslim Brotherhood in one trial, according to an LA Times February 2, 2015 article.

Forty-eight hours later, Judge Shehata sentenced 230 accused people to life in prison for allegations ranging from protesting, joining a sit-in, and being members of Muslim Brotherhood to terrorism.

The Financial Times said in an April 24, 2015 article, “Judge Shehata is Egypt’s ‘hanging judge.’ Usually sporting dark sunglasses in court, he oversees trials for political crimes, including those charged with demonstrating illegally, and hands out harsh sentences.”

A court of appeal later canceled Judge Shehata’s sentences in one prominent case, according to a New Yorker article.

Amal Clooney was the lawyer for one of the journalist defendents in the case, dubbed “the Marriot Cell case”. She later wrote an article in the Huffington Post with title, “The anatomy of an unfair trial.”

In it, Clooney said, “What logistics are involved in establishing a kangaroo court to silence critics? This trial provides a guide to how it’s done.”

Since May 24, 2017, the Egyptian government tightened censorship and blocked more than 465 websites, leading hundreds of journalists and media workers to lose their jobs, according to a report by the U.S.-based Open Observatory of Network Interference.

Arrests and detainment of journalists are not new to Egypt under the current government. This trend began with the election of el-Sisi in 2014. 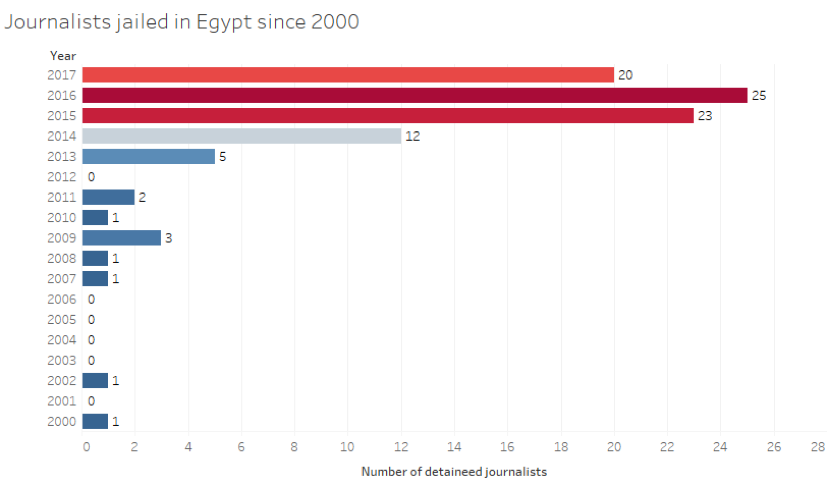 Journalists jailed in Egypt since 2000. Data collected from the CPJ website. For the Excel source file, click this link.

This chart of the number of journalists imprisoned in Egypt, shows a stark increase over the last three years. This graph is a visualization of the statistics provided on the CPJ website.

Abdullah al-Fakharany, a citizen journalist and medical doctor, wrote a letter from his prison cell in 2015 with the title, “My second World Press Freedom Day in an Egyptian jail.” He said, “I was naïve – at least in the first days after I was arrested. I thought that the world would rise up to defend me, my colleagues and the freedom of the press, which was nurtured in Egypt after the 25 January Revolution in 2011. I thought all those press and human rights organizations, as well as opinion leaders who preach day and night about freedom of opinion and expression as essential values and principles, would do their best to stand in the face of flagrant violations against journalists in Egypt.”

Engy Fouda received her M.A. in Journalism in May 2018 from Harvard University and a graduate professional certificate in Data Science in 2017 from Harvard University. She earned her B.Sc. and M.Sc. in Computer Engineering from Cairo University, in 2001 and 2006 respectively. She has published several books that have made the Amazon best-selling charts for Arabic books. Currently, she teaches at one of Microsoft’s certified centers as a freelance instructor, works as a freelance editor at the Polaris and Dawn companies, a freelance technical editor at Versailles Engineering Systems Lab, Paris-Saclay University, and as a news reporter at Blasting News. Furthermore, she is a volunteer journalist at the Harvard Extension School Paper and writes about American Muslims at MVSlim.com. She has worked as a teaching assistant at the American University in Cairo and the German University in Cairo.